Point-Counterpoint: How is Duke Landing The Country's Top PG Prospects Over UNC?

Share All sharing options for: Point-Counterpoint: How is Duke Landing The Country's Top PG Prospects Over UNC? As all of you know by now, the nation’s top PG recruit, Austin Rivers, cancelled his visits to UNC and Kansas last week and decided to commit to Duke. Sure, it was pretty much the decision everyone expected to happen eventually anyways, but it’s leading to a bit of a crisis of confidence among the Carolina faithful. Between Austin and freshman Kyrie Irving, that makes two years running that Coach K has managed to bag the top point guard recruit in the country. This seems especially perplexing because, in our [heavily] biased opinion, guys like that would be better suited playing eight miles down the road. So it’s time for us to semi-seriously tackle this question in a point-counterpoint between brothers: why would a point guard want to play for Duke over UNC (or vice versa)? And what does it mean for the rivalry to have Duke land the country’s top PG two years running?

Zeke: So as the UNC contingent, it’s up to me to fire the first volley, and I think I want to tackle the “why” issue first. We all know Roy Williams has an especially rich history recruiting athletic bigs and wings who want to run the floor, and why wouldn’t he? Guys like that want to play in an uptempo system that plays to their strengths and pads their stats, which fits perfectly with Williams’ secondary break. But shouldn’t point guards also be flocking to Chapel Hill like the salmon of Capastrano? Point guards that get to run more generally end up with better stats, too, and while I can understand someone like John Calipari luring top-rated kids with the illusion of being in total control of his dribble-drive offense, I just don’t understand the lure of a point guard going to play at a place like Duke that doesn’t have a recent reputation of being freewheeling or uptempo in nature. Austin Rivers said one of the main things that drew him to Duke was “the freedom they give their guards” - can you explain that one to me a little bit more?

Alex: Okay, as a Duke fan there is almost too much for me to respond to all at once. First of all: the Carolina-Blue sky is not falling based on the Heels not getting either of these two recruits. Not so long ago the Duke ‘faithful’ were frothing at the mouth about Harrison Barnes being the prototypical Duke guy - and if we missed out on him then Coach K had completely fallen off the recruiting pedestal that had allowed him to cherry pick recruits in the late 90’s. FYI - Coach K seems to be doing okay even though Barnes is wearing the wrong shade of blue.

Second of all: Yes, Roy Williams likes to run up and down the court, even when perhaps his personnel (*ahem* last season) isn’t totally suited for it. But even with athletes to run, it doesn’t necessarily mean top point guards should be salivating on their own prodigious cross-over dribble’s to sign up. The Ol Roy system should appeal most to speedy, pass-first point guards. Both Irving and Rivers have the speedy part down and have athleticism to spare, but neither one seem to me to be pass-first kind of guys. Judging strictly by the highlights I have seen, Rivers especially seems to me to be more of a Chauncey Billups type of scoring point man.

Third of all: The last few years (last year most especially) Duke has been forced to play slower pace than we are used to. But that has been predicated on personnel not on a change in philosophy. The last 20 years have been a mix of slow-footed, traditional 1 Men - Paulus, Wojo - and lightning in a bottle kind of guys - Hurley, Williams. But make no mistake Coach K prefers to play more up-tempo basketball that fits in with his high-pressure defensive philosophy.  When Duke last had a player like Irving at the point (yes I know the comparisons are technically premature) the Jason Williams led Dukies were at or near the top of the national scoring charts and Williams was a big part of that.

Fourth of all: Coach K despises traditional basketball position labels. Partly because in college the necessity of fitting a prototype is less important, and also I think he doesn’t like the way that labels limit a player that is still developing. There have been a number of players over the years, Scheyer is a perfect example, that he has actively campaigned against labeling as a point guard or shooting guard. The Assassin of 1000 faces to him was just a guard. Meaning he would handle the ball and spend less time in the paint. The ‘freedom’ that Rivers is alluding to I think is the motion style offense that has always been a staple of the Krzyzewski playbook. In college basketball’s guard-dominated game, Duke guards are constantly moving - often reading the defense and given liberty to make plays on their own. Austin Rivers looks to me like the kind of instinctive player who is deadly off the bounce and will thrive in that kind of environment.

Fifth of all: Maybe Irving and Rivers want to play Defense?

You do make some great points about Duke shedding traditional positional labels, though. I definitely think there’s certainly plenty of appeal for a top recruit to step into a system where he can alternate between distributing and scoring responsibilities without having to shoulder the load individually on either cause. The only thing that strikes me as funny about that is that we’re always hearing how top recruits are often thinking ahead to the NBA already, and scouts in the league seem to always drop guards down a few pegs if they don’t have an easily definable position at the next level. Dahntay Jones, Demarcus Nelson and Jon Scheyer come to mind as guys that probably didn’t get drafted as high (or at all) because of this very problem. (It’s definitely worth noting that Roy Williams’ teams seem to have this same issue with big men - is he a 4 or a 5 in the NBA? Do we even know if he has a post game because all he did is run in college, etc.) I doubt Irving and Austin will experience any kind of drop in their stock because they’re both incredibly talented regardless, but I always think it’s interesting how college coaches and (players themselves, sometimes) try to break away from traditional basketball models when that seems to hurt their pro stock. 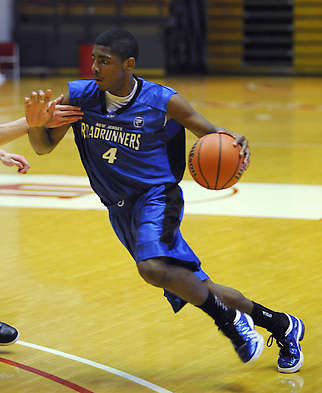 Just to address your top issue, I guess I’m placing more weight on the Irving/Austin combo coming to Duke because it seems to me that in recent history, he who has controlled the point guard matchup between the Devils and Heels has controlled the rivalry. Before last year UNC dominated Duke over a 4-year stretch thanks in no small part to the Lawson-Paulus mismatch, and in the years before that the two teams took turns trading punches seemingly based on what PG stepped up, or didn’t - Chris Duhon’s reverse layup at the Smith Center in OT in 2004; Ray Felton fumbling a pass away in the last seconds in Cameron in 2005, then redeeming himself in the rematch later that year by coming up with the ball in a scrum and tipping his own missed FT to Marvin Williams, who made the game-winning bucket for UNC; and of course Duke’s dominance during the Jay Williams years. Not to discount the contributions of other positions, but a point guard mismatch in the rivalry seems to matter more than an advantage in any other position on the floor. And now it looks like you guys will be led by two of the most prized point men in the country over the next two years (if not longer), while we will be wringing our hands every other possession wondering if we can manage an entry pass without turning the ball over this time.

Alex: It’s a fair criticism that Duke has not placed as many pros (more earlier in Coach K’s career) as perhaps their All-Americans would suggest. Duke big men have an especially bad track record with colossal busts like Shavlik Randolph and Chris Burgess as well as disappointing pros like Shelden Williams. Perhaps that is due to the fact that we have a 5’ 11” point guard coaching our big men… but lets get back to the guard discussion.

The ‘freedom’ from position labels definitely did not help guys like Nelson and Scheyer when draft time came around. Each had other things working against them of course - DeMarcus had a suspect jump shot and Scheyer couldn’t seem to shake the perception that he was a slow white guy. Neither of those things will be factors for Irving and Rivers. Those two guys are, by all indications, pretty special players who will not likely struggle to find a spot on an NBA roster whenever they decide to go pro. (*note to both of them: College is really fun. Getting drafted by the Sacramento Kings… will not be. Just sayin’)

As to your worry about the impact of the superior point guard play on the rivalry: be afraid because it’s pretty justified. I would point out that the two examples of J Will and Ty Lawson are a bit skewed because when they were on the court in rivalry games they were not only the better point guards but the best players on the court. Period. (And yes I am well aware that Tyler Flails-borough was on the court when Lawson was playing.) Good point guard play is always important, but especially so in the super high-pressure-cooker of Duke/UNC. The point has to be able to handle that pressure and still be able to make good decisions in the midst of all that heavy emotion. Irving and Rivers certainly appear to have the kind of athletic and mental chutzpah to be difference makers.

The truly scary thing for Duke opponents is that both of the recruits (Irving perhaps more so) are likely going to have a big impact on the defensive end. For the last 6 years of Paulus/Scheyer we haven’t really had the guards who can put the kind of on-ball pressure that Duke normally likes to utilize. Nolan Smith has become a great defender, but his quickness has often been needed on whoever the biggest opposing scoring threat was. But this season we are going to be absolutely scary quick on the perimeter with Smith, Irving, Seth Curry, Andre Dawkins, and Tyler Thornton (who has been overlooked in this discussion perhaps foolishly since he was the starting PG on his AAU team that included Kendall Marshall btw)

The good news for Duke fans is that both Irving and Rivers are not going to be on a team where the guard-cupboard is bare and they would be expected to shoulder the load completely. Even if they were, I would expect both to avoid Larry “the Hindenburg” Drew-like crashes. We shall soon see. (Is it Feb 10th yet!?!?!)