Bart’s take: Have we learned nothing from this past year?? 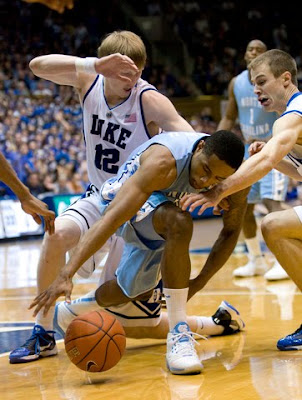 Last year at this time UNC fans were giddy with the prospect of having a redonkulously deep, (and tall and talented) frontcourt, solid senior leadership, and another top-10 recruiting class with multiple Mcdonald’s All- Americas. Their flames of their giddiness were further stoked by the preseason prognostication that they were the fourth best team in the country. We all know how things went from there. Ol’ Roy proceeded to drive his team straight to NYC and the NIT, stopping occasionally to throw his players under the bus. It was a debacle. It was a disaster. No one debates this. If ever there was proof that preseason rankings are not to be believed then this was it.

That is, until about a week ago, when this year’s voters, in a clear effort to trump last year’s effort and make this poll look even dumber, put the Heels at #9 nationally.

In the months following the slow motion train wreck that was the UNC season, they lost every starter from the team that began the disastrous 2009-2010 campaign except the erratic ( and that’s the most generous descriptor I can think of) Larry Drew (if Iverson is The Answer, maybe Drew’s nickname should be The Question. You know, like the one that gets screamed by every UNC fan who watches him play : “What the hell are you DOING?!?”) That starting five included 2 seniors, an NBA lottery pick and their only rising senior and best 3 point shooter.  In addition, they lost MickyD’s All Stars Travis and David Wear. Those players contributed about 65% of the minutes played, 65% of the points scored, and 70% of their rebounds. And NOW they’re a top 10 squad???

There will doubtlessly be those who argue addition by subtraction, and, given how disfunctional last year’s team was, I can credit that arguement to a degree, but that’s a hell of a lot of production and experience (and height) to lose to think that there will be improvement by their colective exit.

The return of Tyler Zeller and John Henson to the frontcourt also make it one of the best in the ACC, but good enough to make them a top 10 team? I think not.

The linchpin to this absurdity is clearly UNC’s incoming fresman class, and in particular one Harrison Barnes, who some people have forecast as this year’s ACC POY. There is no debating that the kid is a unique talent and that the class as a whole is stellar, but to pin a national ranking that is that high on a group that has played exactly zero minutes of college basketball seems like a big reach to me.

Only time will tell folks. Maybe HB is this year’s Carmelo and he leads UNC to a justification of this high preseason ranking. A little circumspection wouldn’t hurt, though.

Zeke’s Counterpoint: It might be a liiiiiitle high, but Carolina at #9 isn’t THAT much of a stretch.

Look, I understand the anti-Carolina pundit’s argument on this one. Last year was definitely a Hindenburg wrapped in a turd sandwich and served with a side of kick-to-the-groin, and UNC should have to prove that they have the ability to consistently win games before they can get into the top 10 rankings-wise. But the problem with that argument is that it’s logical, and is based in a world where teams have to prove something in order to be ranked, whereas preseason polls and rankings aren’t based in reality; they’re based on POTENTIAL. And UNC is a team with a ton of potential.

Sure, you can point to last year’s team that had that same kind of potential - and guess what? For a while, they actually lived up to that hype! It’s easy to forget that the wheels really came off of Carolina’s season during ACC play, where they went 5-11. Yes, they got upset by College of Charleston out of conference, but they also managed to beat Evan Turner and Ohio State, mop the floor with a Michigan State team that ended up making the Final Four (a late Spartans run made the score respectable that game, but the Heels totally dominated), and lose by just 2 points to John Wall and Kentucky at Rupp Arena. At no point during their out-of-conference schedule were the Heels ranked any lower than 12th in the country. Sure, we know what happened after that - mounting injuries took their toll, confidence took a clear hit, a lack of resilience became evident, and the wheels generally came off, but for a while there Carolina looked every bit the contender many analysts thought they could be.

Now, with that having happened, Carolina fans are a lot more reserved going into this season because a lot of “what ifs” and “maybes” still hang over this team - the frontcourt is thin, some guys are injury prone, and we haven’t seen the freshmen play yet. But again, the reality is that you have to rank a team based on how it is currently assembled, without reservations about injury history, based on how well you think they can perform against other teams around the country and their overall talent level. It would be a double standard to suggest that Carolina be exempt from being ranked highly because of one bad season when they’ve shown that they’re a consistent winning program with a lot of talent on the current squad, and every team that I see below them in the rankings has plenty of their own questions to answer, as well.

Another thing that I do want to say plays into this, I think, is that analysts and media experts hate to be late on the bandwagon for anything, so they pre-hype any player or team that seems poised for greatness just so they can pound their chests when it turns out to be true (and conversely they love to play dumb when things they’ve predicted don’t come to fruition). The Harrison Barnes hype machine, which Carolina’s ranking is clearly tied to, is just part and parcel with that whole system - everyone wants to be the one to notice the next John Wall or Derrick Rose, a freshman phenom that takes his team to a new level. No one wants to be the guy who highlights a team built around upperclassmen that have gradually gelled and improved together, leading to teams like Illinois, Virginia Tech, BYU, etc being criminally underrated in the polls. (Side note: I predict that unfortunately, a lot of Duke’s early-season coverage is going to be devoted to how good Kyrie Irving is for this very reason - you watch). So yes, it’s unfortunate that UNC is getting so much hype coming into this year without having proved much, but the media loves teams with fresh faces and dynamic talent, and UNC seems to have both. Like Bart said above, maybe Harrison Barnes is the next Carmelo Anthony, in which case why WOULDN’T Carolina be a top-10 team?

So, if we are asking the question “is UNC’s preseason ranking deserved based on question marks left over from last year’s struggles?” then no, probably not. But if we admit that preseason rankings are based on a program’s pedigree, their talent level, and their pure potential in an imaginary world where injuries don’t exist, then yeah, I think the Heels are top-10 worthy. Fortunately, we don’t have to wait too much longer to find out whether they actually are or not…