The Case for Duke

Share All sharing options for: The Case for Duke

Zeke made a great point in his South Bracket write up. Duke has once again found itself in the center of controversy surrounding its seeding and relatively weak bracket. It’s a damned if you do, damned if you don’t conundrum.

ESPN has had a series of articles up in the last few days. This one confronts the notion of Living and Dying with the 3 pointer. At the bottom it shows the 3pt FG percentage of the last 6 exits in the tournament by Duke – where never once have they cracked 31% and twice were in the teens. Ouch. This one (which requires ESPN Insider status) shows a list of common denominators of the past few champs and eliminates the Devils based on one criterion: FG%.

And to my mind that is really the only question worth asking when you talk about Duke’s title chances: Can Duke make enough shots in a one-and-done situation to win? 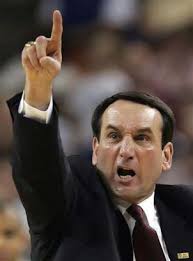 Under Coach K, Duke has always had a reputation for playing tough, pressure D that relies on denying passing lanes and being disruptive. A valid complaint at times has been Coach K’s stubborn commitment to that kind of defense even when Duke hasn’t had the athletes to make that kind of system work. I would submit that that has played a big part in the current stretch of early tourney flame outs.

So can this team contain superior backcourt quickness? The last three years in the tournament the Dukies have been done in largely by speedy perimeter players. In this year’s bracket the only teams that jump out on paper in that category are Richmond, maybe Siena, and Nova. (If Duke does get Nova again this year I would expect them to loose again.) But if someone else can come out of that half of the bracket I like their chances.

One could certainly argue that this years Duke team fits the description of being lacking in the athleticism department. But Duke has been able to overcome that deficiency largely through experience. The current starting group of all upperclassmen really knows how to play team defense. They are the second best team in the entire field when looking at adjusted defensive efficiency (second to FSU btw). They hold teams under 62 points per game (but based on this year’s ACC maybe we should take that number with a grain of salt) and manage a sparkling 27% on opponents 3 point FGs. When they have struggled on the offensive end, and the list of games that fit that category is long, their D has kept them in the game. Make no mistake this is team is a great defensive team that far exceeds what you expect on paper.

So the defense will be good enough to keep them in any game, but can they make enough shots to actually win the game? That will be the question that only the games can answer. Here are some things that I think have to break right for Duke to win it all:

As a fan, I can’t say that I am terribly confident they will make it to the Final Four, much less win a title. But in some ways that helps them. It’s always a little easier to be a bit of an underdog. Working in their favor is the fact that the Devils have three legitimate scorers who can carry them. And Jon Scheyer, despite his late season shooting swoon, has proven to be willing and capable of hitting huge shots in big moments.

But just how legit are these Blue Devils? Unfortunately we probably won’t have a clear answer until Sunday since the sacrificial lamb in the first round has officially been given a ZERO percent chance of winning by ESPN’s game simulator and comparison tools.