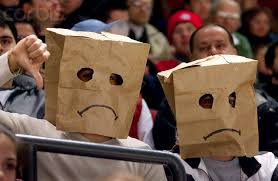 The Wolfpack looked like a team that had already lost when they took the floor on Saturday night. Certainly their fans were operating under this assumption, as several of them showed up to the game with the iconic paper - bags - of - shame which they donned at game’s end. That’s never a good sign. After hanging with the Devils for the first 4 minutes or so, the Pack just layed down and got steamrolled by a 21-2 Duke run. Playing woeful basketball of late even with a full deck, N.C. State was additionally hamstrung by not having the services of freshman C.J. Leslie, their best athlete, who was held out for disciplinary reasons. It was a miserable performance from a program in complete freefall, in a conference that is having as bad a year as anyone can recall.

On the Duke side, the Devils played a mostly outstanding first half, with occasional lapses in their ball-screen defense ( something which has, unfortunately, become a bit of a pattern) leading to a lot of easy points in the paint. Nolan dropped in 18 and Kyle 10 in what can only be classified as  an embarrassing beat down. The second half was a seemingly interminable shoddy display from both teams, as Duke lost their edge and played down to N.C. State’s level. In Coach K’s words our defense “was deplorable” and was matched in its deplorability by our shooting, as Duke went a startling 6-31 from the floor and 10-17 from the line. ( Duke was 17-31 on FTs for the game, which has got to be one of our worst performances from the line in a looong time)

This, like the Wake game before it, wasn’t much of a barometer, other than measuring the sad state (pun intended) of affairs for the Wolfpack. In fact, a lot of games in the ACC this year aren’t a barometer for much, except to confirm the collectively woeful play within the conference. It’s for this reason that the constant talk of UNC’s resurgence this week has been annoying to me. Are they playing better ? Sure, but when needing a last second shot to beat a crappy Miami team, routing the miserable Wolfpack at home, and clowning a BC squad that has lost to Harvard AND Yale are causes for optimism, it says more about where you’ve been than where you are. I guess we’ll find out where things stand on Wednesday, now won’t we?

- Mason was again heavily involved in the offense, going 7-8 from the floor, finishing at the rim ( for the most part) and displaying an 8 foot hook shot to good effect on 2 occasions. He finished with 16 and 12 and could have had more points had he not gone (sigh) 1-7 from the line.

- Duke outrebounded State 42 - 31 and had an incredible 17 offensive rebounds.

- Tyler Thornton got his second start at PG and, while he did not have an especially productive 22 minutes, seems to be a good “tone-setter” for the Devils to start games

- For the second straight game, the bench saw some serious minutes ( 82), though with the exception of Seth ( 13 points) and Miles ( 6 boards) didn’t do a whole lot with them.

- Currently, there are only 3 ACC teams ( Duke, UNC,BC) ranked inside the RPI top 50 and 4 ( UVA,State, Wake and GT) ranked outside the top 100. Having neither the time nor inclination to research this, I’m going to hazard a guess that this might be a first. It might be that 10 conference wins is the cut-off for the tournament this year, which probably means 3 teams ( 4 at the most) make the dance. yikes.