I’ve been staring at my computer off and on for the better part of 4 hours today, finding any and all distractions possible to keep from attending to this game wrap up. I have a lot of thoughts about last nights bitter end to another great season for the Duke Men’s Basketball team, but it has obviously been very hard to put anything down. It brings a finality, a very big and very ugly exclamation point to this season that is incongruous with the most of this year.

Arizona coach Sean Miller correctly said after the game that this was actually two completely different games within the same 40 minutes. The first half was a display of superior Duke effort vs Derrick William’s unconscious shooting, the only thing that kept the Wildcats from being down 12-15 points. The second half saw everyone else on the court going unconscious as well, Zona’s players in the good way and the Devils in the brain-dead-zombie way.

It’s almost hard to remember that Duke played very well in the first half. All the talk leading up to the game had been whether Duke would have an answer for Williams (*ahem, that got answered) but in the early going Arizona had no answer for Kyle Singer. He hit his first several shots, including two early 3’s, and was aggressive driving to the hoop - something that had all of Blue Devil Land breathing a huge sigh of relief. Kyrie Irving’s first half play also had everyone on Twitter calling for the end of the pretense of bringing him off the bench. He had 14 on some eye-popping finishes and looked like the early season guy that no one could keep out of the lane. Those two combined for eight straight points after the under 8 time out that seemed like it might open up what had been a tight game as Duke led by 11. But the Devils apparently delved too deep in their avarice and awakened Derrick “The Balrog” Williams. (ask your local Lord of the Rings nerd if you don’t get the reference) He drew 2nd and 3rd fouls on Singler and Miles on consecutive trips, and then banged home back to back triples with increasing degrees of difficulty to cut the margin back to 4. But the back breaking eye-roller was his final shot of the half: a 30 footer against text book defense to again cut a working margin to 6. It’s the kind of shot you only make in NBA Jam when you are shooting a flaming ball. Or in this case when you are having a career high against Duke in the tournament. Sigh. 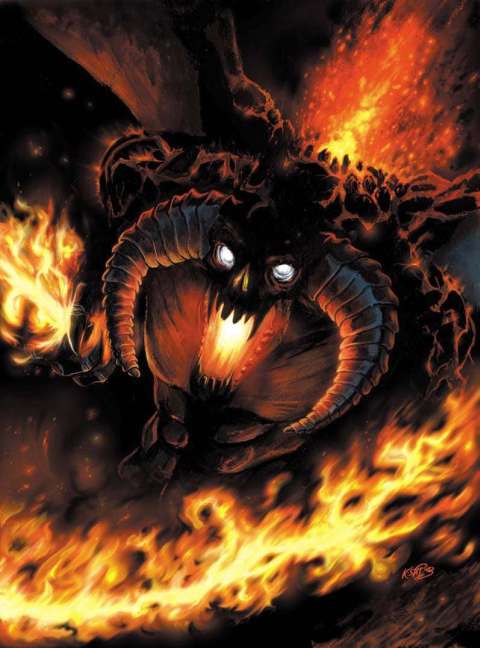 At half time Duke probably spent some time thinking about what they could do to stop Williams - and to a degree they were successful in holding him to only 7. But Arizona spent halftime chiding their team about Duke’s +6 rebounding and 11 second chance points - something they were able to correct much more ferociously. I can’t imagine that the Wildcats have played a better half all season, absolutely killing Duke on the boards to the tune of 25-10 including only ONE Duke rebound in the first 8 1/2 minutes of the half where Arizona turned the 6 point deficit into an 11 point lead. On the offensive end the Cats only had ONE empty offensive possession during that same stretch (and only 5 total for the half by my count) as Duke’s defense was devoid of life and purpose. Or to use an appropriately ugly word, feckless. But the only way to stop another team’s run is to score. Something the shell-shocked looking Devils were also unable to do. I think the team probably shot more air-balls in this game than they had in the months of January through March combined. It was truly shocking to watch this Duke team seem so helpless and so hapless. Arizona was getting all the bounces, something that normally happens to the more aggressive team. Perfect example: Singler slips back door for what should be a layup but the pass from Nolan is a bit late - ball bounces around and the Cats come up with it. As they bring it up court Andre Dawkins plays great denial defense and the ball hits him in the back of the bicep, but the loose ball finds its way into Arizona hands for another easy bucket. The final straw, however, came as Nolan Smith missed a transition layup - a shot he made all year - that would have cut the lead to 9 with six minutes left and some casual jogging back by Singler led to an easy bucket for Solomon Hill. Lead back to 13. Duke deflated and defeated.

We will have more on this game, with a slightly more far-sighted perspective in the next few days. The gloom of this moment will hang with us for a while, but there will be time soon to reflect more positively on what this years team, including it’s great seniors has truly been in totality. It’s just pretty raw right now. As Coach K said after the game, it’s not any easier to loose in the tournament just because it was a blowout. Stumbling face first into a sweet sixteen buzz-saw isn’t any better than stumbling into a traveling violation down by one in the championship game. The end is still cold and hard and abrupt. And that’s about all there is to say about it. For Today.