So, What's Wrong with Duke?

Share All sharing options for: So, What's Wrong with Duke? 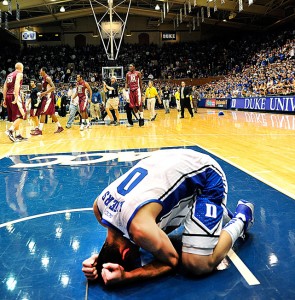 The Duke Blue Devils are 16-3with wins over the ( currently) 5th,10th,19th and 20th ranked teams and tied for first in the ACC... and no fan who is paying attention is altogether happy.

Are we just spoiled? Are we overly critical? Do we expect too much?

The answer to all of these is probably yes. Years of winning ball have made your critically thinking Duke fan far more concerned about HOW Duke wins than THAT Duke wins, the latter being more or less a given with a program that rarely loses more than 6 games a year.I mean, I just saw my first Duke loss in Cameron in 2 years!

After a spectacular showing in 3 games in Maui, during which Duke seemed to noticeably improve game-to-game, the Blue Devils wandered out to Columbus and got pummeled in a game against OSU, the extremity of which pummeling many attributed to fatigue ( which I still believe is true). But the fact is, with perhaps the exception of the first half against Washington, this Duke team seems to be coming apart more than coming together or, more accurately said, playing apart instead of playing together. Yes, they are getting wins, but the impression one is left with that they are getting by. Here are some reasons why that might be.

I realize that this could read like a lot of bashing on a team that’s won some pretty good games and I know that the slope separating honest appraisal from overt negativity can be a slippery one. This team had more question marks surrounding its makeup and potential than any Duke team in quite a while, and it has been at times enjoyable and interesting ( in addition to frustrating) thus far to see ( and not see ) answers bubbling to the surface. All of these issues are potentially fixable and no one ( hopefully) is at any risk of considering this a lost season. The success of this team will and should be measured in its growth as a team, not in wins and losses.