The West Region: It looks Best from this Nest

Share All sharing options for: The West Region: It looks Best from this Nest 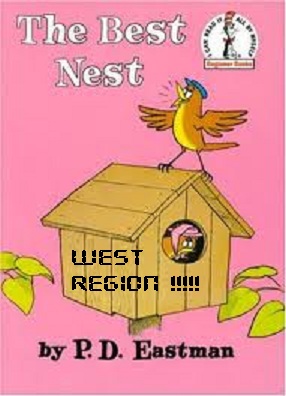 I love my Bracket, I love my Nest, in all the world the West is Best!

Ah the West. So peaceful. So serene. So many under-seeded teams.

It's funny to me that the committee probably did the right thing out west but with some crooked logic. Michigan State got the last #1 by winning the toughest conference's tourney (while sharing reg season). When I saw the bracket I thought they correctly chose the best #2 seed (30 win Mizzou) to fill in with them. According to the selection brain trust, however, the Tigers were #8 on the S Curve (um aren't you kids getting a little carried away with this non-conference SOS stuff...). So how they thought the 'worst' #1 and the 'worst' #2 should go in the same bracket we shall never know. (just exactly how BYU got in the dance with their conference commissioner on the committee is not a mystery though) At any rate, the West Region looks stacked to my mind; especially with so many teams that look stronger than their seeding number (Murray St, Memphis, UVA, Florida).

Readers of this blog likely remember the Spartans as inept offensive team that looked over-matched on an aircraft carrier and not much better  as they scored 8 points in 10 1/2 minutes to open the second half giving up win #903 to Coach K. It seemed people were correct in leaving them off the pre-season top 25.  If not for that pesky Tom Izzo guy, we might have been right. Since then, the only clunker MSU turned in was a loss at Illinois, but along the way finished tied for first in the Big Ten and have 11 wins against ranked teams. Draymond Green is doing his best Royce White impression by leading his team in points, rebounds, minutes played, steals, and probably Big Macs eaten. Izzo has done it again my friends. This one's real so do believe the hype. Awaiting them in Round Two (I refuse to go by this 'new' naming scheme) will be either a red hot Memphis team who shoots almost 50% from the field or a tough, defensive minded  St Louis team coached by ol Uncle Majerus. The four teams in  5/12 and 4/13 matchups all could easily make it to the second weekend: New Mexico - deep with suffocating D and strong work on the boards; Louisville - winners of the Big East and finally healthy; Davidson - more balance than the Steph Curry years and more size; and Long Beach State - UNC fans will have spoooooky visions of Casper "The Friendly PG Ghost" Ware to remember a team who played an aggressive schedule. On the bottom half of the bracket awaits Missouri Big 12 tourney champ, a team that plays on unconventional but entertaining brand of basketball. Their four guard lineup shoots over 50% from the field on the year, scores a ton of points (6th nationally at over 80 per game), but is unsurprisingly vulnerable on the glass. I would not be alone in salivating for a Regional Final against Michigan State where the contrast in styles would be a great storyline. Mizzou is in an unlikely position of having a lot of guard-dominated company potentially awaiting them in the Sweet Sixteen, with four other teams not sporting a starter over 6'7" (CSU, Iona, Marquette, and Murray St). Of course the Florida/UVA winner stands in the way (and Norfolk state technically) and both present challenges: Mike Scott we know is a beast as the Cavaliers would try to slow them down and Florida matches them in perimeter scoring prowess with bigs that could make for a headache. But the team I admit I am rooting for is Murray State. Three seniors and two juniors came within a whisker of an undefeated season. I don't care what the competition is, that is impressive. I was born in Ft. Collins, Colorado and went to preschool on Colorado State's campus, but I hope Murray State cruises past them and into the Sweet Sixteen. I doubt I'll have the courage to pick them in my bracket, but I'd be thrilled if they made it to the Final Four.

So there it is folks. The Wild West. The only trouble is we have almost 2 more days to wait. We got seeded WHAT?!?

Dark Horse - Murray State has got to be at the top of this list. Scoffed at by the selection committee in terms of seeding, they at least find themselves in a subregion populated with teams who won't be able to take advantage of the Racers' lack of height. Pitted against similar teams, the Racers have a real shot here. I would also forward Memphis and quite possibly Davidson. The former has athletes to burn and is playing well, while the latter has height, scores the ball from all positions, beat Kansas in Kansas, and is always dangerous in the tournament.

Best First Round Matchup - Missouri has 1 starter over 6'6" while Norfolk State starts no one under 6'6", so there's that. And Memphis vs St Louis looks tasty. But I think the most intriguing game is Florida vs. UVA. It feels more like a second round matchup to me somehow. UVA makes up for talent with coaching while Florida does the opposite.The Mike Scott/Patric Young battle should be fun to watch, and Bradley Beal can light it up. UVA's solid perimeter defense will be put to the test by the team that takes the most 3's in Division I.

The 'Who?" Award - St.Louis. Apparently they're very good, but who knew that before a week ago? Rick Majerus put the 'O' in O-ffense but his team is a defensive beast (or so I hear).

Best Potential Second Round Matchup - . UVA vs. Mizzou would be a fantastic contrast in styles, as would Memphis vs. MSU.

Upset Special - Davidson. Any team that plays Duke tough in Cameron and wins at Allen Field House can beat Louisville. Bob McKillop can coach em' up with the best.

Best Mascot - A classic Morton's Fork Dilemma. They all suck. I'll go with the Billikens. That's different and kind of cool, right? I'll distract them with my fancy Highlighter...

The 'Why are they here?" Award - Colorado State.  Go compare their resume with Miami's (or even better Drexel's) and tell me how this makes sense?!?  BYU is also very questionable, even as a play in.

The Home Cooking Award ( for the team most benefiting from geographical placement) - The committee may have been trying to make up for seeding Murray State so high by putting them, if not in their own backyard (Louisville) , at least just one yard over. If New Mexico makes it to the Sweet 16 (a very real possibility) they will be playing in Phoenix.

The Shitburger Award ( for the team most jobbed) - Here's what the committee should have done : Murray State as the 5 (or 4), Florida as the 6, Memphis as the 7 and New Mexico as the 8.  Murray, in particular, got the shaft as it stands now, with Florida a close second.

The WakeCincyPittBigTenTeam Award ( for perennial underachiever to avoid picking for a deep run into the tournament) - I'm going to go Louisville here. They were basically out of the top 25 and then won the Big East Tournament and somehow got to a 4 seed.  I don't trust it.