Duke claimed their first true road win of the season, but is your Blue Devil glass half full or half empty?

Here at Blue vs Blue we try to offer more of an editorial voice than simply giving yet another game recap. We try to offer a critical eye on the teams we root for, and last night's Duke game gave ample opportunity to feel both contentment and anxiety. I was forced to watch the game on tape delay, so I took the opportunity to jot down notes as I went along - pausing the game as necessary. In looking back over the notes, there were often times observations that paired up quite nicely. It seems they fall into two categories: Good Devils and Bad Devils.

Good Devil - Duke's offensive sets are really sharp early. Getting looks for Seth and actually feeding the big guy inside. This is the mark of good preparation. (Sulaimon picking up his 2nd early foul was another moment of good prep as Duke had clearly scouted Wake's sideline out of bounds play and had the defensive assignments perfect. It's around the 12 minute mark - really a thing of beauty except the overzealous reach by Rasheed resulting in the foul)

Bad Devil - Duke's early defensive effort is not terrible, but not locked in or screwed on or whatever idiom you want to use. There are too many lapses though that give Wake easy baskets: Seth looses McKie for a second and gives up an open look from 3, Mason is caught day dreaming in no-man's land, back door cuts are given up, etc.

Good Devil -10:32 Great heady play by Tyler Thornton while falling down he tips a loose ball ahead to Mason for the most awkward layup of the season. Mason now has 12 points and Wake has no answer for him one-on-one, but they have decided that is how they are going to defend him. If this were an NBA game Mason should finish with 30+ points, but I am guessing we will stop giving him the ball at some point.

Bad Devil -Poor Amile Jefferson. He gets more tough fouls called on him than any other Devil in the last month or so. (by tough I mean bad) He challenges a 3pt attempt by Chase Fisher - that probably should have been called a foul - but the offensive rebound finds it's way to CJ Harris who does his best Reggie Miller job hooking his arm behind Jefferson on his follow through to pull him further into a collision. Whistle Blows. Three free throws later Wake up 5.

First Half Thoughts: Officiating terribly inconsistent and bad (ed note it got worse in the second half. rarely see so many calls missed that should have been made and stupid calls made that should have been let go. both ways) After the early defensive lapses, Duke has settled in. Spotted Wake a good lead early that lead to giving up 40 points. Need Sulaimon to provide some scoring. DON'T STOP FEEDING MASON THE BALL!

Good Devil - Listen to the coaches a lot at half time, and you come out looking prepared again. Duke scores on four or five of the first possessions (offensive foul number 214 on Duke keeps it from being 5-5). Duke forces 3 turnovers and Amile shows the difference between he and Josh (or Mason for that matter) as he is quick enough to stay with a driving Deacon and force a bad shot because he is there to challenge it (without fouling!)

Bad Devil -Curry fails a bad heat check by forcing up a shot immediately after CJ Harris makes another tough one over him. This sort of quid-pro-quo, 1-on-1 streetball nonsense is a trap Seth seems to fall into a lot ( Reminds me a lot of a guy in Duke's backcourt he apparently didn't get a long with very well last year. Might explain that a little bit mightn't it ? ) Seth makes shots, but he costs Duke almost as much when you count bad decisions like this - or the shove in the back on the defensive glass that gives Wake two points on the line (see below). I admire the desire to fire back, but know your limits. (that goes for you too Quinn Cook - whose step-back three point attempts need to have some permanent shackles thrown on em with a quickness. That ain't your game, son ! at least not yet...)

Bad Devil - Wake brings Devin Thomas back in with four fouls at the 2:50 mark. We spend most of the possession watching Seth dribble the ball in a way that seems he will likely turn it over any moment, then force a bad shot, Duke gets the offensive board and Rasheed misses another open look at 3. Yes almost a minute ticks off the clock, but why in the name of all that is HOLY is Mason not getting the ball????? This is the dumbest of a lot of dumb execution errors on the night.

Good Devil - Duke makes the plays at winning time (just after the above rant) after Wake cuts the lead to one. Winning Play #1: This time Duke does force the ball to Mason on the block, there is a proper no-call on the Thomas flop (but another missed call the obvious intentional foul rake by Moto as he grabs at Mason with 2 hands) and MP2 caps off an amazing game with a layup through contact.

Winning Play #2: Sulaimon hits a clutch jumper as the shot clock is ticking down to put Duke up 5. (incidentally this is aided by a slip by CJ Harris - one of many players doing so as the game wore on. Wake needs some towel boy/girl help. Seriously.)

Winning Play #3 and #4: Harris sprints up the court only to find Mason actually challenging his shot - getting a great block. Hairston then makes an incredible diving save on the loose ball. (and allow me to eat some crow in that Josh also did manage to make a fine defensive play previously that was exactly what I was praising Amile for [and saying Josh couldn't])

So what are we left with? 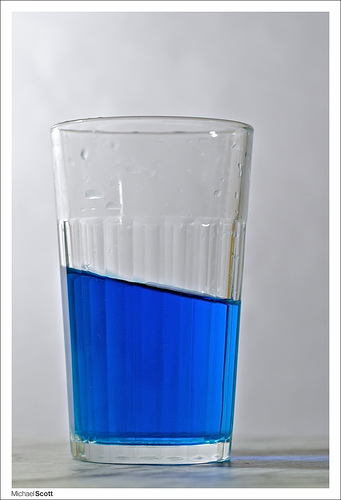 This glass clearly isn't not half un-full...

Well, sir, I'll tell you. Our defensive abilities are extremely compromised with the absence of Ryan Kelly. (Click on this link and you'll see that there's no denying it. )And, the fact is, the ceiling on its improvement just isn't that high. Josh is tough as can be but is slow and undersized, Amile is a good defender but is inexperienced and lacks strength, and both are extremely foul prone ( Josh may set the record for illegal screens in a season). That leaves a lot of the interior defensive responsibility to a guy that is totally handcuffed because he knows his team can't afford to have him off the court basically, like, ever. That's just not a great scenario. We are probably going to have to simply outscore people until Ryan gets back, which means that we just can't afford to have anymore 2-14 ( or 4-23) 3-point shooting nights ( I mean, who CAN, really?). Mason WILL get into foul trouble again, no matter how careful he is and it is more than likely we will lose that game unless Marshall is able to step up in a big and unexpected way.

This team is good enough to beat anyone in the ACC as currently configured and vulnerable enough to lose to anyone ( especially on the road). Adjust your expectations accordingly.