A couple of brave souls from the Blue vs Blue family spent more hours than they'd like to admit watching future college stars at the Boo Williams Invitational. In our first segment we profile the players for 2014 that are on Duke and Carolina's radar

Imagine a building big enough to house eight basketball courts and substantial bleachers for each court. As you step inside, the smell of a cornucopia of fried food items around the crowded concession stand in the main hallway hits you none-too-pleasantly (this will happen to you every time you step into this hallway, for the record). If you listen closely, between the shrill report of referees' whistles, the blaring substitution horns, and the bellowing/screeching of the 'stage' parents, you will undoubtedly also hear the bombastic shouting that passes for coaching amongst a certain coterie of portly, middle-aged AAU head coaches; apparently hoping to stomp, gesticulate, and admonish their teams of precocious NBA hopefuls to victory.

Well, it is. But only if you A) Really, really, really like basketball or B) Have landed one of the handful of jobs that actually pays you to attend these events and hobnob with other scouts, members of the press, or coaches. Since we are not in group B, we ask that you cherish the forthcoming information as it was dearly earned with sore backs, dry and tired eyeballs, and chicken-fried brains from trying to remember dozens of names, teams, game times, court numbers, and recruiting stati.

For those as ignorant as we were about AAU logistics, the Nike EYBL consists of 40 regional teams from around the country consisting of players 17 and under (There are also '16 and under' games at these tourneys, but due to stamina issues, we opted out of those). The "season" consists of 4 weekends at various sites where teams play 5 games over three days (15 minute halves and 4 minute halftimes). The top 24 teams then go on to the Peach Jam finals which we attended last year. This weekend's leg in Hampton was the second leg (LA being the first).

Perhaps because attending this event as non-press/non-coaches/non-parents made us feel like huge basketball nerds, we've decided (probably at the risk of undermining any credibility we might have had) to let our geek flags fly and go all 3d6 to get the attributes of the higher profile Duke and Carolina recruits, as well as identifying a unique attribute for each. First up, those matriculating in 2014 ! 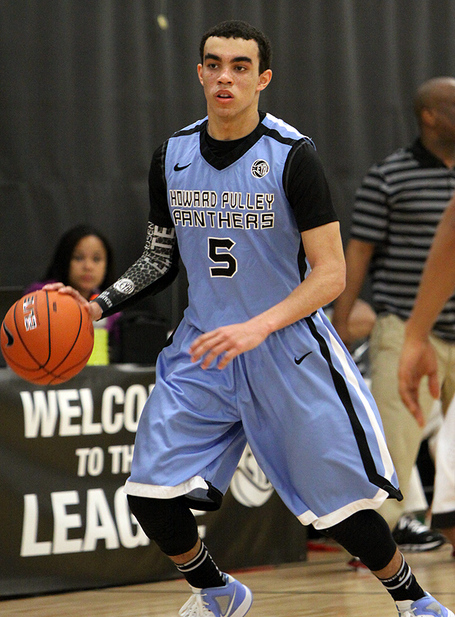 PG Tyus Jones 6'1" 180 - Strength: 13 Dexterity: 17 Speed: 15 Intelligence: 18 Leadership: 12 Special Ability : Tyus Time - With 5 minutes left, get the ball into his hands... game over. Last year at Peach Jam the only inarguably better player than Tyus was Andrew Wiggins. This year, no one we saw was on Tyus' level. You get the feeling that he could drop 30 every game if he was asked to do so, but he's a team guy. He almost seemed to hang back in the first half of his games to get his teammates involved, before turning it on in the second. And man, when he turns it on, it's lights-out-party's-over. Tyus is in total control at all times. He is unperturbed by double teams and physical play. He is a great shooter, a fantastic passer, and finishes in the lane consistently with a nice floater. He will not blow you away with his athletic presence, his leaping ability, or his ability to get to the rim. But he will blow you away with his control, his confidence, his anticipation and his awareness. Leadership-he's pretty poker-faced and doesn't talk much; a lead-with-quiet-confidence type of guy. Defensively, he showed great hands and instincts, and, despite the fact that his team plays almost exclusively zone, he should do well in man-to-man. Hopefully he has a chance to prove that he can at Duke. Player Comparison - A smaller, less athletic Kyrie Irving 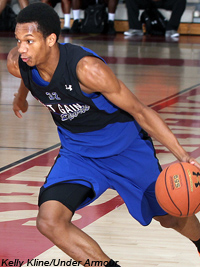 SG Rashad Vaughan 6'6" 200 - Strength: 15 Dexterity: 15 Speed: 14 Intelligence: 16 Leadership: 12 Special Ability : Smart Bomb - exhibits unusual combo of aggression and good decision making. One of the top shooting guards in his class, Rashad has great bounce of the floor and a really soft shooting touch (has one of the higher arcs to his jumper you will see). He stays outside a fair bit, though is completely unafraid to attack in the paint offensively. He could be a better rebounder given his strength and athleticism. He's a capable if unremarkable defender and a very versatile scorer who is always looking for his shot, but rarely seems to take a bad one, which is a rare combination. He is definitely not a playmaker/passer. UNC's coaches were at a lot of his games. They would be ecstatic to get this guy. Player Comparison - A more offensively skilled Danny Green 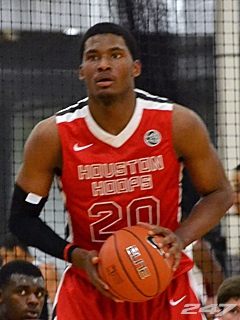 SF Justise Winslow 6'6" 215 - Strength: 17 Dexterity: 15 Speed: 14 Intelligence: 17 Leadership: 18 Special Ability : Swiss Army Knife - Need a PG/SG/SF ? Well, here's your guy Justise is the complete package. He handles the ball well enough to play PG for his Houston Hoops team, can drive and score and has a nice lefty jumper from 15 feet and in, is built like a linebacker, has a high basketball IQ and is a born leader. His perimeter shooting still needs work, but in all other aspects this guy is a coaches dream. The smart money is on Arizona or Duke we'd say, but Kansas and Florida are strong in the running. UNC has an offer to him as well. Player Comparison - A Lefty Nate James with a sprinkling of Gerald Henderson 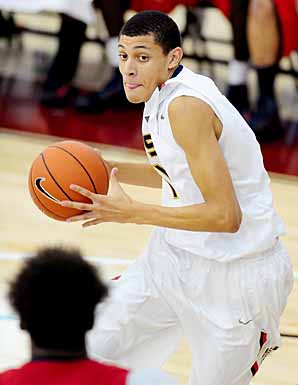 SF Justin Jackson 6'8" 185 - Strength: 10 Dexterity: 17 Speed: 12 Intelligence: 17 Leadership: 12 Special Ability : Justin-on-the-spot - Whatever you need, he will provide This UNC commit is always in the right place at the right time with the right play. While not visibly any stronger than he was last August (a Jon Henson-like frame would be a generous comparison) and not especially fast, he is a highly skilled player who has a sneaky quickness about him. He has a great baseline floater and never seems to miss inside of 10 feet regardless of the type of shot. He has a very high basketball IQ, is unselfish, and is a skilled passer. Crafty and skilled would be the two best descriptors for his game. He must improve his strength and lateral agility to be able to defend well at the D-1 level, but this guy is going to be a royal pain -in-the-ass for Duke fans for years to come. Player Comparison - Tayshaun Prince or a 6'8" Ryan Kelly without the perimeter game 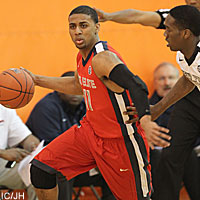 PG Joel Berry 6'0" 185 - Strength: 16 Dexterity:16 Speed:14 Intelligence: 15 Leadership: 14 Special Ability - Ball Control : When the Ball is in his hands, it's in good ones Strong, sturdy and smart, this UNC commit knows how to score and how to run a team without making mistakes. Consistency is a word that leaps to mind with his game. He has a good jump shot and doesn't shy away from contact. He is not an outstanding defender, and not exceptionally fast or explosive, but Joel is both a playmaker and a scorer. He's a bit of a throw back PG in his game as he makes running the show his top priority. Player Comparison - A stronger, slower Ty Lawson with a better jump shot 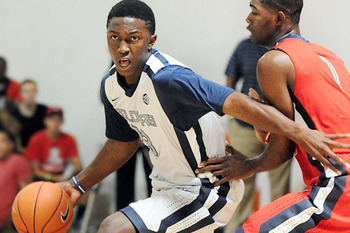 Stanley Johnson 6'6" 220 - Strength: 18 Dexterity: 15 Speed: 14 Intelligence: 13 Leadership: 11 Special Ability - Double Edge: Is in aggressive attack mode 100% of the time, which is great (until it isn't) This guy is just a big strong athlete, who also happens to have the ball skills to basically play point guard for his AAU team. Not many 6'6" 220 guys can claim that. He loves to play defense, he loves to rebound, and he loves to attack to basket. You might expect a guy with his size and strength to mix it up inside but his offensive game is 2 parts : shoot the 3 or take it to the rim (his 3-point shot is a little flat). There's nothing in-between. In fact, Stanley is an all-or-nothing type of guy. His natural aggression does get him in trouble, as it sometimes leads him to write an offensive check his skill can't cash. But he isn't a put-your-head-down-and-get-to-the-rim-no-matter-what-else-is-happening player a la Julius Randle, either. He's a very good passer who is willing to get his teammates involved. His on-court demeanor sometimes leaves a little to be desired. He's the type of guy who will not hesitate to complain to the refs or be a little slow getting back on defense when things don't go his way on the offensive end. Duke fell off of his list for a time and recently worked their way back in. Stanley really likes Rasheed Sulaimon's game and the way Duke uses him, which should come as no surprise given some of the observations above. He really sees himself as a SG. Player Comparison - A below-the-rim Michael Kidd Gilchrist 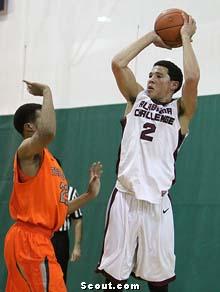 Devin Booker 6'4" 175 - Strength: 13 Dexterity: 17 Speed: 15 Intelligence: 15 Leadership : 12 Special Ability - The Prototype : A pure, 100 %, bonafide Shooting Guard Close your eyes and picture the ideal shooting guard. Not a combo guard, a SHOOTING guard. That's Devin Booker. Smooth and gliding; effortless looking jump shots with great rotation; athleticism enough to finish at the rim but most of his points coming from 10 feet and out. Devin is not overly strong, or aggressive, or fast, or a great leaper, or a vocal leader. He's just a really good looking basketball player. Duke and Carolina both have extended offers, though there is some speculation that the Grayson Allen signing has hurt Duke's chances at landing this guy. Player Comparison - Wayne Ellington

There are several omitted names here: Jahlil Okafor was injured but we did see him doing some nice carrying of Gatorade for his teammates (worth noting that Wojo stayed for several of his games anyway...) Grayson Allen was likewise dealing with injury and didn't even make the trip with his team.