In this installment, we'll take a look at a few of the guys who might be wending their way to the Triangle two years from now. (For those uninitiated, the 3d6 die we "rolled" for these scores means that there is a maximum of 18 points per attribute) 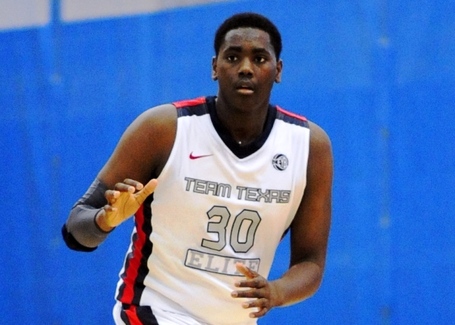 C Elijah Thomas 6'9" 240 Strength : 17 Dexterity :17 Speed : 14 Intelligence : 17 Leadership 11 Special Ability : Hands : If any part of his hands touches the ball, it's his ball until he decides what else to do with it. This is a country strong yet agile big ( and I mean big) young fellow. As noted, he has amazing hands ( whatever his momma is feeding him, it wasn't on the Plumlees' menu) and when he catches a pass in the post it sounds like an m-80 exploding. He is a fantastic rebounder in traffic and a superlative interior passer. His offensive game lacks polish, but he has two years to put a solid shine on what are some very promising beginnings. His basketball IQ is very high ( Harvard is currently on his list of schools), though his on-court demeanor reminds you that he is only 16 years old, as it sometimes borders on the petulant. Duke and UNC have yet to extend offers, but both are interested and I would expect a Duke offer to be forthcoming. Player Comparison - Elton Brand 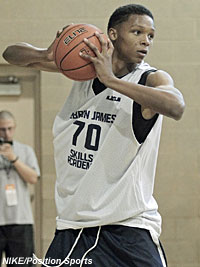 PF Ivan Rabb 6'9" 200 Strength : 16 Dexterity : 17 Speed : 15 Intelligence : 14 Leadership : 13 Special Ability : The Bounce : His third jump is better than most players' first one The number one power forward in his class, Ivan showed us why. For a guy who is just finishing his sophomore year, he's a pretty polished player. While his teams' style of play wasn't super conducive to allowing us to see his post game, he did show several nice skill moves on the blocks. What he did demonstrate with great aplomb, was an ability to 1) get great rebounding position ( particularly on the offensive end) 2) get up off the floor ( and up off the floor, and up off the floor) and 3) get lots of putbacks. Ivan is long and wiry strong. His relies on his athletic ability for his defense, so that part of his game is pretty intermittent at this point. He currently holds an offer from UNC. Player Comparison - A normally proportioned, stronger John Henson with more offensive polish.

SG Austin Grandstaff 6'4" 165 Strength : 13 Dexterity : 16 Speed : 14 Intelligence : 15 Leadership : 11 Special Ability : Confidence Man - There is no shot he thinks he can't make...for better or worse Austin is a coaches' son who looks to shoot first, then shoot, and then , as a third option, he will shoot it. (Hmmmm, now why does that sentence sound so strangely familiar to a Duke fan ? ) The thing about coaches' sons is, while they have a really good understanding of the game, they've also had the green light x 1000 since the day they started playing organized hoops. Now, Austin can really light it up, make no mistake about it. In one of the two games we saw him play he was positively JJ Reddick- esque, dropping in 5-6 from 3. However, he also took about 6 ill-advised, off-balance leaning 10 foot floaters in the lane, when he should have been trying to work inside out with his big-man best buddy, the aforementioned Elijah Thomas. Suffice it to say, discretion has yet to be learned, but he is a bright kid, so there's no reason to think he can't get some of that by the time 2015 rolls around. Duke has not offered, but is showing fairly strong interest. Player comparison - JJ Reddick with a dash of Austin Rivers